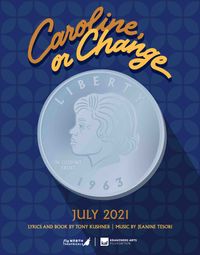 Set in Lake Charles, LA in 1963, Caroline, Or Change is a provocative story about political change, social change, ...and pocket change. In this Tony-nominated musical, Tesori blends blues, gospel, and traditional Jewish melodies which provide a breathtaking medium for Kushner’s very personal and riveting story telling. It follows the Gellman family and their African-American maid, Caroline Thibedoux who is drifting through life as an aging mother of four. Set largely in the Gellman’s basement laundry room, a bond between Caroline and the Gellman’s young son Noah forms, while outside, some of the largest social advancements in American history are happening-- and change is knocking on the basement door. Featuring one of the strongest female roles in musical theatre history-- Caroline-- and her namesake musical -- will leave audiences breathless. Join us 16 feet below sea level for Caroline or Change, opening July 2, 2021.